The Patrician Academy has a very proactive Student Council that makes lots of positive changes under the guidance of Ms. Glynn. At the beginning of the school year, two representatives from each class are elected. At the first meeting, roles are decided within the council such as chairperson, secretary, treasurer etc.

The student council organises many successful events such as the Annual Run, Walk, Cycle which involves both students and teachers alike and raises lots of money to be used positively.

The Green School committee is a sub committee working under the student council with Ms. Glynn. This committee has also done lots of positive work such as joining others around the world to march on climate change in Cork City. They also organised their own march in Mallow town for the same purpose. The art, music and literature departments also worked with the Green School committee to hold an exhibition to raise public awareness surrounding the environment and the damage being done to it.

In total the Student Council and Green School committees do lots of great work for the school as well as the world around us and are a proud part of our school. In 2020-2021 the Global Citizenship group worked with Ms. Glynn and Ms. Walsh to secure their Global Citizenship Passport.

The first week back Mrs Glynn distributed voting slips to the class year heads and each class voted two representatives.

This year’s Student Council has proven an extremely challenging yet undeniably beneficial experience for all involved. In all facets of everyday life, students and staff alike have had to cope with and withstand the obstacles that the ongoing COVID-19 pandemic has presented. The world is a very different place to what it was a year ago and the Patrician Academy is no different.  However, with all of these changes, some things remain the same. The infectious sense of fraternity, the irrepressible spirit of our school community and of course, our Student Council’s tireless endeavours. With 2021 marking the 50th anniversary of our Student Council, there is still cause for celebration in the Academy.

Firstly, I must acknowledge the trojan work of last year’s Council under the helm of Glen Singleton as Senior Chairperson, which was appreciated hugely by the entire school community.  In September, the elected representatives came together for the first meeting of the new school year. It was in this meeting that the roles and responsibilities of the Council were democratically distributed among the Council members. It produced the following:

The first few weeks are always a very busy time in the Student Council calendar as class reps are voted in and the officers are selected. It was also decided to select a subcommittee for the 50th anniversary of the Student Council as it is such an important event in our history . We believe it to be one of the oldest in Ireland if not the oldest.

Academy Students March Against Climate Change in Cork and Mallow.

Last Friday, the 20th of September, millions of people from over 150 countries, left their school, work and home in order to join their local youth climate strike. I was among the attendees. I had become familiar with the strikes through Comhairle na nÓg, an organisation giving young people their say in politics. Many of the people I met there are heavily involved in the climate change debate and were frontrunners at the event. I had learned about our climate emergency though my CSPE classes in the Patrician Academy. I’m no expert on the crisis but I definitely wanted to support the up and coming global strike. I went to Google and of course, Cork City was the nearest location hosting one. I contacted some of my friends and to my surprise, nobody even knew it was on, not to mind wanted to attend. I inquired at St Mary’s, the neighbouring girls school and yet again to my surprise, no one knew a thing about it. I had some friends ask around to see if I could garner any interest, and as expected, there were buckets of it. In the end 23 people, 6 boys and 17 girls confirmed their availability.

We arrived in Cork Kent at 11:40, ready to walk 20 minutes towards Grand Parade, the rendez-vous point. The strike was starting at 12:20 and we arrived with time to spare. No matter how unfamiliar you were with the city, you couldn’t have missed the colossal crowd filling the street, from newborn babies to the elderly.  The crowd was diverse in every category, but united by a common goal; Show The Irish Government that action needs to be taken in order to repair our damaged climate, damage that will soon become irreparable. The strike started to great success. People marched, waving homemade signs and banners. Those who couldn’t join the strike stuck their heads out of windows to catch a glimpse at the spectacle below. After the march, everyone sat and listened to the event’s speakers. They expressed their animosity towards the decisions being made by the government and demanded change. Everyone saluted the speakers in a rebellious raised closed fist, symbolising their readiness to fight for a future. The event ended at about 2 o’clock and we headed home on the train, hoping we had made an impact and that it would be seen in the United Nations emergency climate summit in New York this coming Monday.

The students were practicing the chants and slogans for the last two days with the their teachers and also made many posters based on Global Warming. The chants: “ JOIN THE REVOLUTION AGAINST AIR POLLUTION” and “WE NEED YOU ASSISTANCE TO SAVE OUR EXISTENCE” Our thanks to Steven Murphy and Eugene Cosgrove who have posted on their Facebook pages. 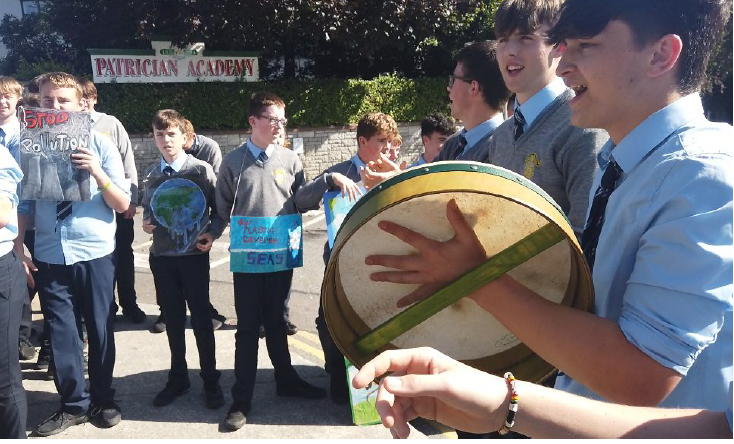 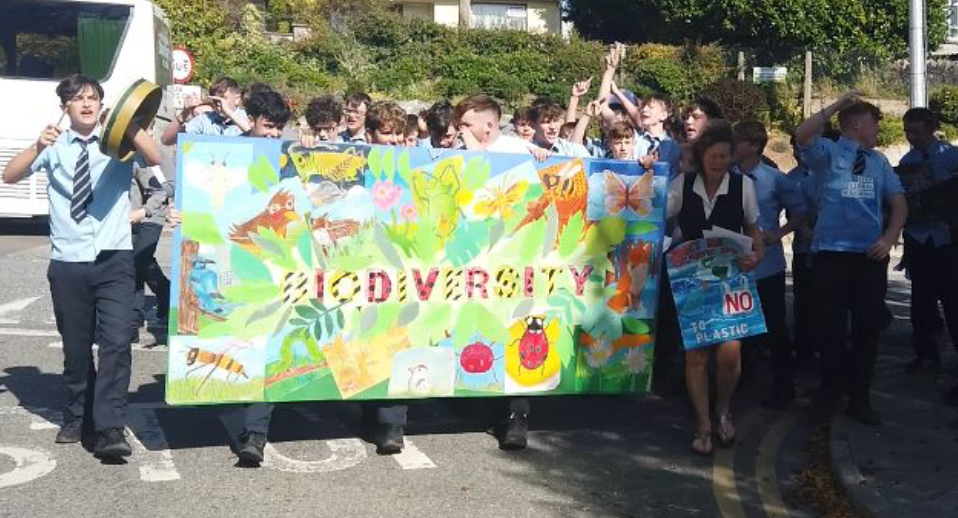 On the 27th of September 2019 Patrician Academy held their annual Run/Walk in Mallows Town Park.  Students from first, second and third year were partaking in it. Many teachers also took part in the event including our new vice principal Mr Ger. Holland who ran alongside the students in his first ever Run/Walk in the Academy.

This year the event would take place in the park and would be five kilometres long for the runners and two and a half kilometres for all walkers. The runners started beside the soccer pitch, did a lap of the town park, ran up by the bullies, turned around and did another lap of the town park finishing where they started. Local newspapers were there on the day to take photos of all participants.  There was a great atmosphere as all students were very excited to be taking part in the event they were excited to be getting off of class!

Members of the student council organised the Run/Walk. Sponsorship cards were given to each of the junior student, approximately  €20 were collected from neighbour’s relative’s ad family. This money was given their money to their student council reps and counted. The treasures Rian O’ Reilly, Kenny Dunne and Ronan Langford looked after the final tots.

It took a long time to organise the event between getting a permit, printing out and distributing the sponsorship cards to all students, getting money and counting it and organising the park so that the runners and walkers would know where to go.  We also had to sort out teachers to run and walk with the students.

Overall the student council raised over €2500 and that money shall be used for many different things such as making Christmas hampers for the St Vincent de Paul and we are hoping to fund more seating for outside the school as so far there is only one bench outside for students to sit during lunch.

Overall it was a great day for students and teachers who participated and we hope that this event goes on for many more years with just as much enthusiasm as we got this year.