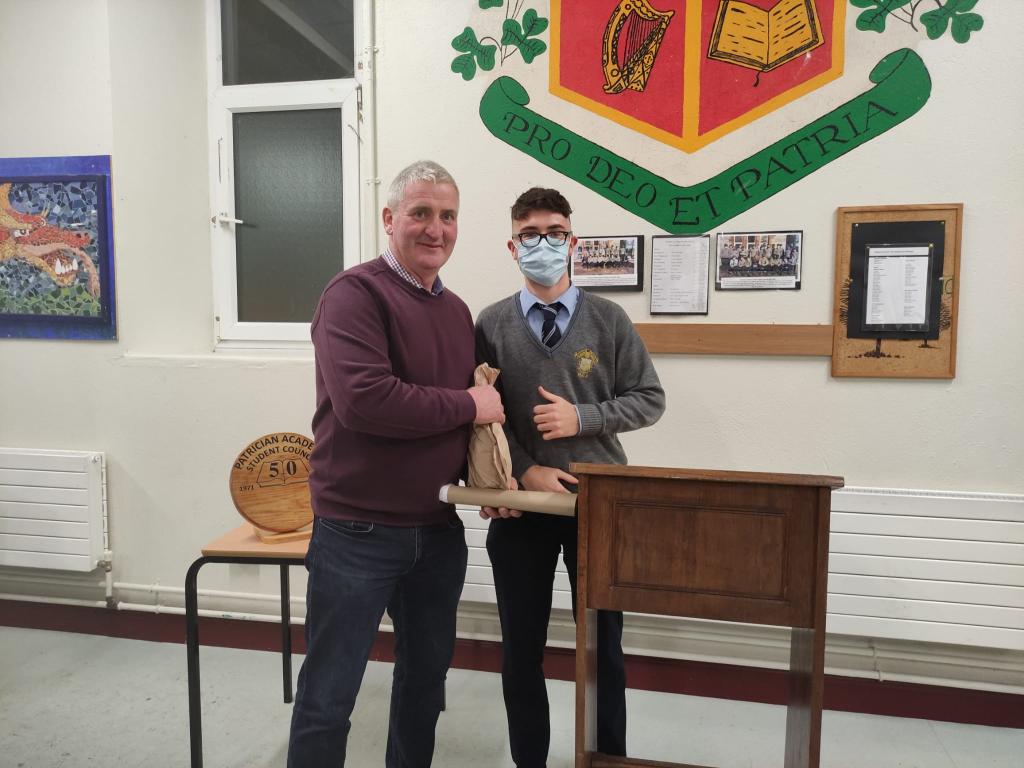 Last Thursday, the Patrician Academy hosted an inter-schools public speaking competition in conjunction with its celebration of its 50th Anniversary of the Student Council, which was held last month. Buttevant Coláiste, St Mary’s Convent and Nagle Rice attended, with two students competing from each school. Current Student Council Coordinator, Miss Regina Glynn welcomed the visiting schools graciously as seats were taken in the school’s Monastery Hall. This was followed by an introduction from Principal Elaine O’ Regan, who invited the evening’s MC, student Eddie Hennigan (chairman), to begin proceedings. Eddie’s natural charisma eased the competing speakers as he fostered an atmosphere of congeniality in place of rivalry. He also welcomed the judge of the competition, Patrician Academy alumni Jeremiah Ronayne. Transition Year student Dylan Mathews represented his Global Citizenship class as he outlined the rules of the night’s proceedings and the choice of topics, before the speakers took to the podium.

First up was Aoife O’Sullivan (St Mary’s Convent), who opposed the motion that ‘Women’s empowerment is a myth in developing countries.’ Speaking with conviction, she decreed that ‘gender bias is endemic’, while criticising the ‘antiquated institutions and sexist politicians’ that uphold these systems.

Next was Martha Zupcic (Nagle Rice), who also opposed the motion that ‘Women’s empowerment is a myth in developing countries, referring to modern day Afghanistan, and citing that ‘12 million underaged girls are married every year’, Martha met the high standard set by the first speaker.

Sarah Salvin (Buttevant Coláiste) followed, proposing the motion that ‘Climate change is the greatest challenge in human history.’ She warned of the dangers of industrialism and human activity. ‘We must save our planet, we have no second option, there is no plan B,’ she pleaded, before finishing with a tactful Greta Thunberg quote.

Conan O’Sullivan (Patrician Academy) also proposed that ‘Climate change is the greatest challenge in human history’, but taking a different approach than his predecessor he scathingly critiqued the glib diplomacy of current World Leaders. Making relevant reference to the recently held COP 26 conference and the 2015 Paris Agreement, he spoke with sincere disappointment in the signatory countries’ failure to meet activists’ demands.

The second round of speakers began, with Kate Magner (St Mary’s Convent) proposing the motion that ‘Ending world hunger is beyond humanity’s reach’. She remarked that humans are not willing to put in the effort to end world hunger. She contrasted the frightfully large wealth of billionaires Jeff Bezos and Elon Musk with a starving population, and stated that ‘greed, conflict religion, racism and the capitalist economic model are blinding people in the first world.’ Bringing the subject closer to home, she unveiled the frightening statistic that ‘1 in 5 Irish children go to bed hungry’.

Emma Murphy (Nagle Rice) followed, proposing the motion that ‘Ending world hunger is beyond humanity’s reach.’ She stated that ‘17 million malnourished babies are born every year’, and identified humanity’s food waste crisis as one of many chains fettering an eradication of hunger. She instructed the room on waste management, recommending meal plans and shopping lists as a way of reducing waste output.

Isi Nnaemeky (Colaiste Mhuire Buttevant) was next, opposing the motion that ‘Women’s empowerment is a myth in developing countries’. She discussed the gender inequality of Afghan women under Taliban rule, and focused on the experience of Malala Yousafzai, who, as a girl, defied the Taliban by demanding girls be educated. Citing the difference in literacy rate between men and women in India and a universal wage gap between the sexes solidified her views effectively.

The final speaker was Pharrell Osagie (Patrician Academy), who opposed the motion that ‘Ending world hunger is beyond humanity’s reach’. Acknowledging the poor distribution of food as a steadfast barrier to a sated world population, he avoided an aura of hopeless pessimism by believing in the combined effort of humanity, finishing by asking everyone to do what they can to combat world hunger.

Tea, coffee, and confectionery was exchanged in the Staff Room following the loaded prowess of the evening’s speakers. Pity was extended to judge Jeremiah Roynayne for having to denominate the winners from such an excellent lineup. And before long it was time to announce the winners. Jeremiah took to the stage and delivered a masterclass in oratory as he relaxed the crowd once more. He individually analysed each speech before announcing the evening’s winners. In third place was Isi Nnaemeky. In second place was Kate Magner (St Mary’s Secondary School Mallow), who took home Kate Magner. And in first place was Pharrell Osagie (Patrician Academy) who was awarded 100 euro for his efforts.

The night was an undeniable success enjoyed by all. 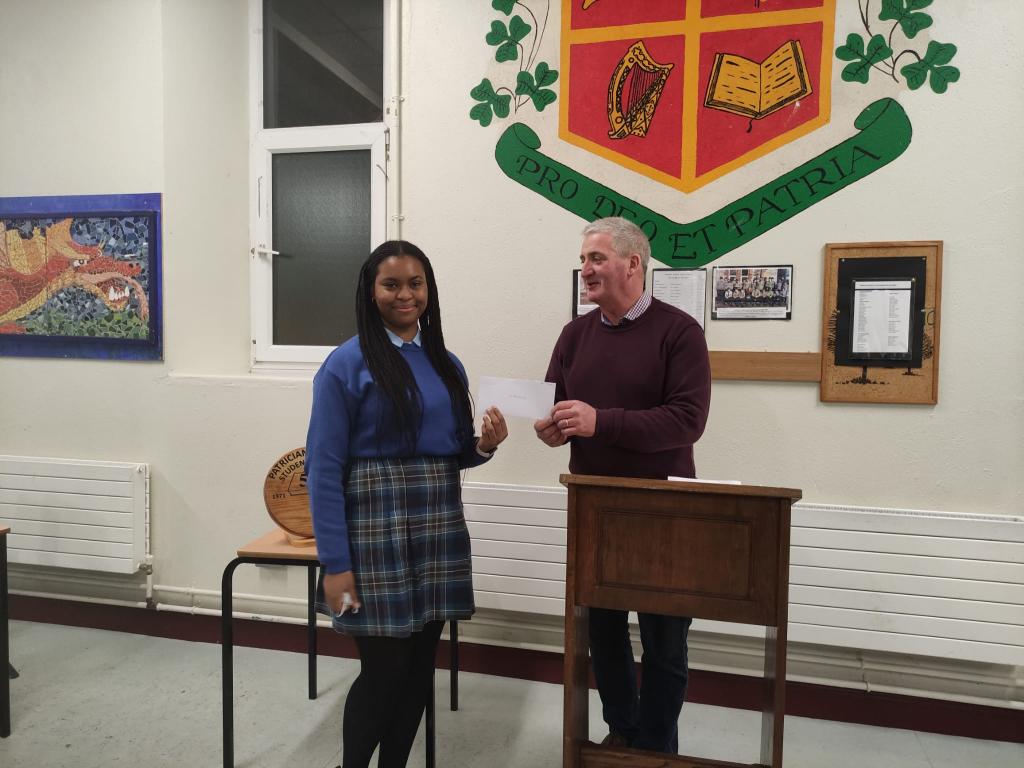 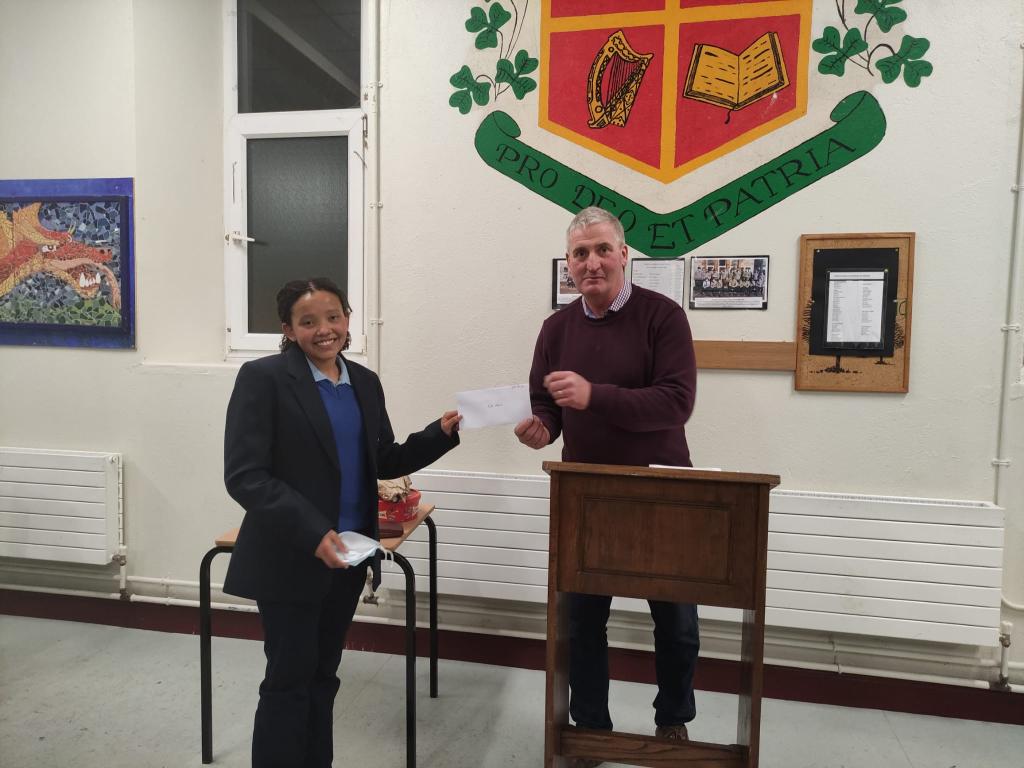