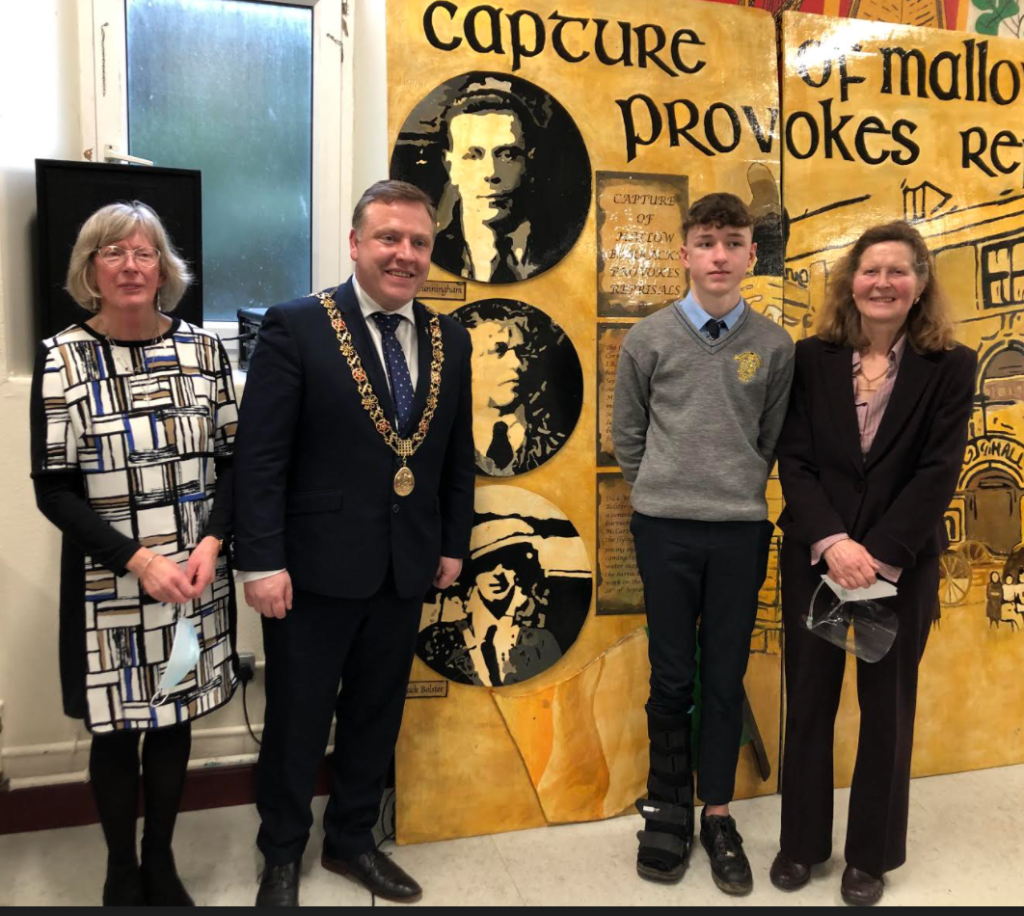 On Tuesday the 25th of January, the Patrician Academy launched their latest exhibition ‘Capture of Mallow Barracks Provokes Reprisals’. Undoubtedly, it was an artistic exhibition, with beautiful murals and miniature model reconstructions of Mallow’s main street. There was music and poetry and a fascinating history shared.

Crowded into the school’s monastery hall, the events began with Transition Year students Michael Walsh and Adam Lillis playing a poignant, Planxty piece on concertina and guitar, setting a tone of respect and remembrance that was carried throughout the exhibition. Gratitude was expressed to the Lord Mayor of Cork Cllr. Colm Kelleher and his mother Stephanie Kelleher, whose attendance only further solidified the importance of the commemoration. Ms. Regina Glynn, co-ordinator of the project kicked off the event by outlining the developments of the project. Ms. Glynn passionately commended the talent and effort that her students had invested in the fantastic art’ projects, but promised that there was lots more to come in the form of poetry and music.

There was more music, courtesy of the school trad group, before three Transition Year students, namely Alan O’ Connell, Kyle Barron and Brian O Connor took to the podium. They described in cinematic detail, one by one, the events that led to the capture of Mallow Barracks and the Reprisals that followed, focusing on the two primary characters of the event: Dick Willis and Jackie Bolster. Second year student Jamie Willis, a direct descendent of Dick Willis was invited to speak briefly about his great grandfather’s life. This section of the exhibition was impressively brought to a close by Eoin Turner and Mark O’ Shea, two of the school’s most gifted trad musicians.

The Fields of Athenry was sung by the school choir before four first Year students, namely, Sean O’ Halloran, Kenneth Plaku, Cian O’Mahony and Harry Vu Ryan, took to the podium to read some of the poetry relevant to this period. Following this, three Transition Year students, Adam Lillis, Paddy O’Mullane and Colm Hannon read their own poetic compositions inspired by the events. It was endearing to see the younger generations take up the history of their forefathers and it made the evening feel all the more important and special.

Finally, the Lord Mayor of Cork was invited to speak, and that he did. He gave an impassioned, informed speech, revealing his own unique link to the Capture of Mallow Barrack’s history at hand. He expressed the importance of his chain of office and that it had been proudly worn by to past Lord Mayors, who had given their lives for the freedom of Ireland, Tomás Mac Curtain (1920) who was shot dead and Terence MacSwiney (1920) who died on hunger strike in Brixton Prison. The Lord Mayor’s speech was one of the major highlights of the event. The evening was fittingly brought to a close with some thanking words from Principal Miss Elaine O’Regan and a final rendition of ‘The Town I Loved So Well’ by the talented choir. Tea, coffee and confectionery was offered from the staff room. The evening was an undeniable success, enjoyed by all. On behalf of the students I’d like to thank the following teachers C. Stokes, S. O’Shea. P. O’Tuathail, S. O’Sullivan. B. Cahill, M. Dawson and of course the project co-ordinator R. Glynn. 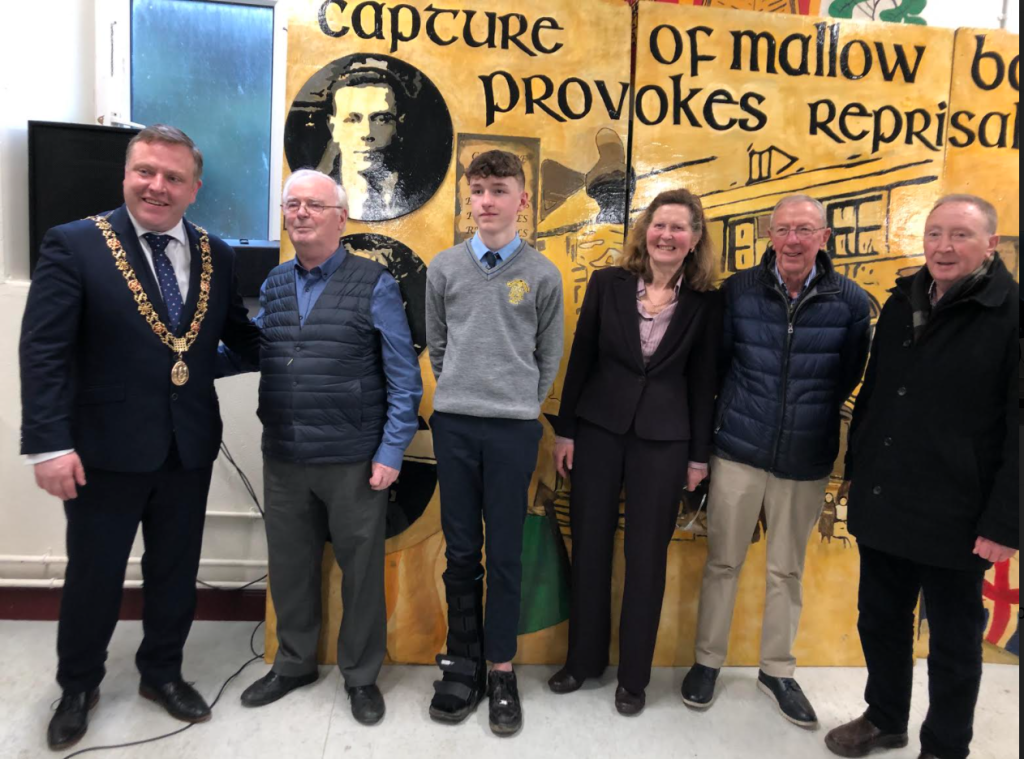