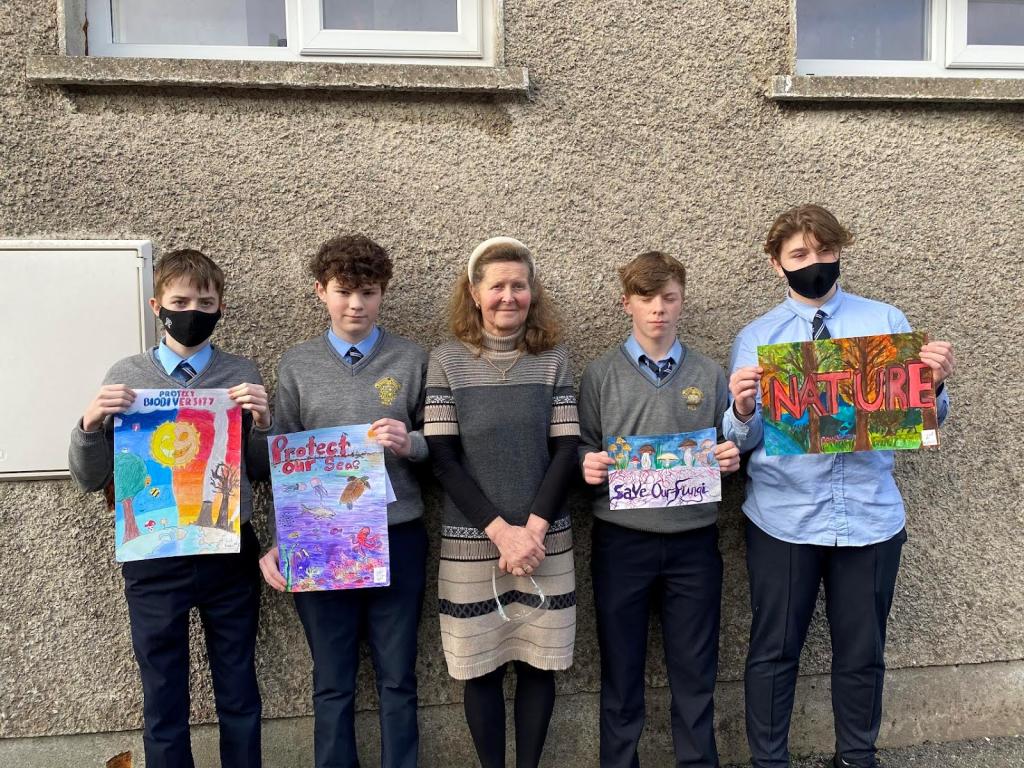 We had a fantastic week of talks, quizzes, wildlife films, poster competitions, clean-ups and French classes on bees. Thanks to all the teachers, guest speakers and students who all gave of their time to make it such a success. The following is a short review of what happened.
-Launch of Biodiversity Garden
On behalf of our Principal, Elaine O’Regan, we have been granted what little area we have left in the Academy to create a dense and biodiverse garden. In January Dr. Pádraig Whelan, Chief Science Officer and Co-Founder of ApisProtect most graciously visited the school to survey the area and give suggestions for plant species and tips to help boost biodiversity. We discussed wildlife corridors, the reduction of foreign soil, plant and animal species and ways of making a maintenance-free garden. On Monday the 31st of January, we kicked off Biodiversity Week with the launch of this garden by John Casey of Teagasc and Elaine O’Regan. We hope to add to this in the future.
-John Casey’s Biodiversity Talk with 2nd Years
On the same day John Casey gave a talk to all our second year students about sustainable agriculture and food development. He also touched on the need for diversity in terms of forestry in Ireland and the increasing importance of diverse hedgerows on the bordering farms. He asked what we could all do to help the environment in the farming community and how we can help to increase biodiversity in our local areas.
-Pádraig Whelan and Richard Weedle’s 5th Year Talk
The next day on Feb 1st, another talk was held, but this time for the Fifth Years. Eager to learn more about the sprouting opportunities in the data science and biodiversity sector, they tuned in to Patrician Academy alumni, Richard Weedle, now a data scientist at ApisProtect. The presentation was also hosted by previously mentioned Dr. Pádraig Whelan, Chief Science Officer and Co-Founder of ApisProtect. Both sides of the same coin, Richard Weedle gave advice to aspiring data scientists about the opportunities subjects such as physics, honours/applied maths and IT can grant nowadays and advised the fifth years to keep their options open. Pádraig on the other hand, gave insight into his profession in the biological, earth and environmental sciences and industry and worked off each other to deliver a very valuable and informative talk.

-Biodiversity Quiz
On February the 2nd, the Global Citizenship TY’s involved in organising the Biodiversity Week held a quiz for both First and Second Years. Rounds included geography, nature, sport, movies & television, music, with a total of 8 rounds. There was also a round with questions based on the biodiversity talk given by John Casey of Teagasc to truly test if the Second Years were listening the day prior.

With over 40 groups there could only be 2 winners, one for First Years and one for Second Years. The stakes were high and prizes of €10 for each member were to be given out at the end for the triumphant group. The event began with the First Years.
Students were seated, rules were announced and we were on our way. 4 rounds and 40 questions later, the first year quiz results were in. Team 7 were victorious with 25 questions correct out of 40. Team 5 missed out by 1 point with 24 out of 40. The winners of the First Year Quiz were as follows: Darragh Carroll, Cathal Murphy, Diarmuid O Riordan and Jonathan O Callaghan

Next it was time for the Second Year’s quiz. After another successful battle of wits the tension was immense while the points were being counted, it was looking like it would be a close one. Fortunately (or unfortunately) we required no tie-breaker questions as the results were in.

-1st Year Art Competition
This week also held an Art competition for our First Year Art Class. This involved making posters to promote messages of biodiversity, with first prize receiving €10 and the three runners-up €5 each. The 1st years guided by Mr. O’Shea and Mrs. Glynn drafted and finalised their posters which contained a wide range of imagery, themes and messages such as Biodiversity, Nature, The Sea, Fungi, Global Warming/Climate Change, etc.

-Launch of Bee Sculpture
To tie in with our message “Bee brilliant, Boost Biodiversity”, those involved in Mrs. Glynn’s Art Class have launched our bee sculpture project, which will be made from recycled plastic and other upcycled materials on top of a metal frame. 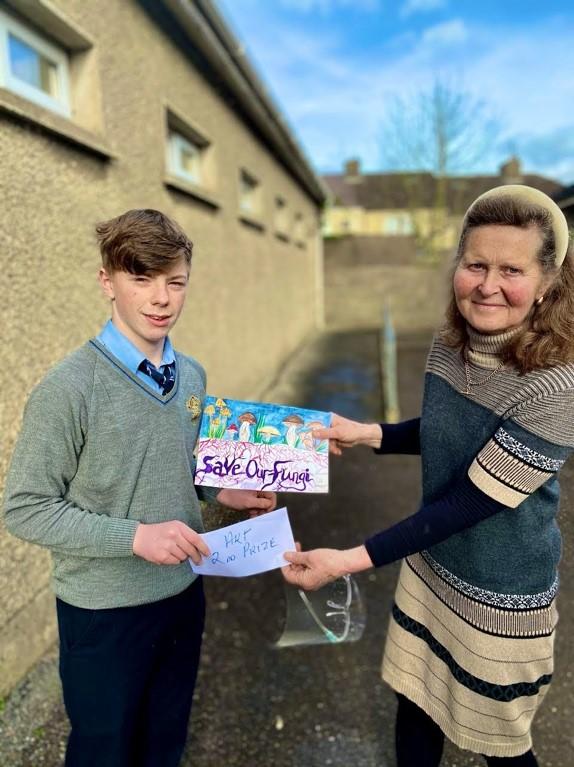